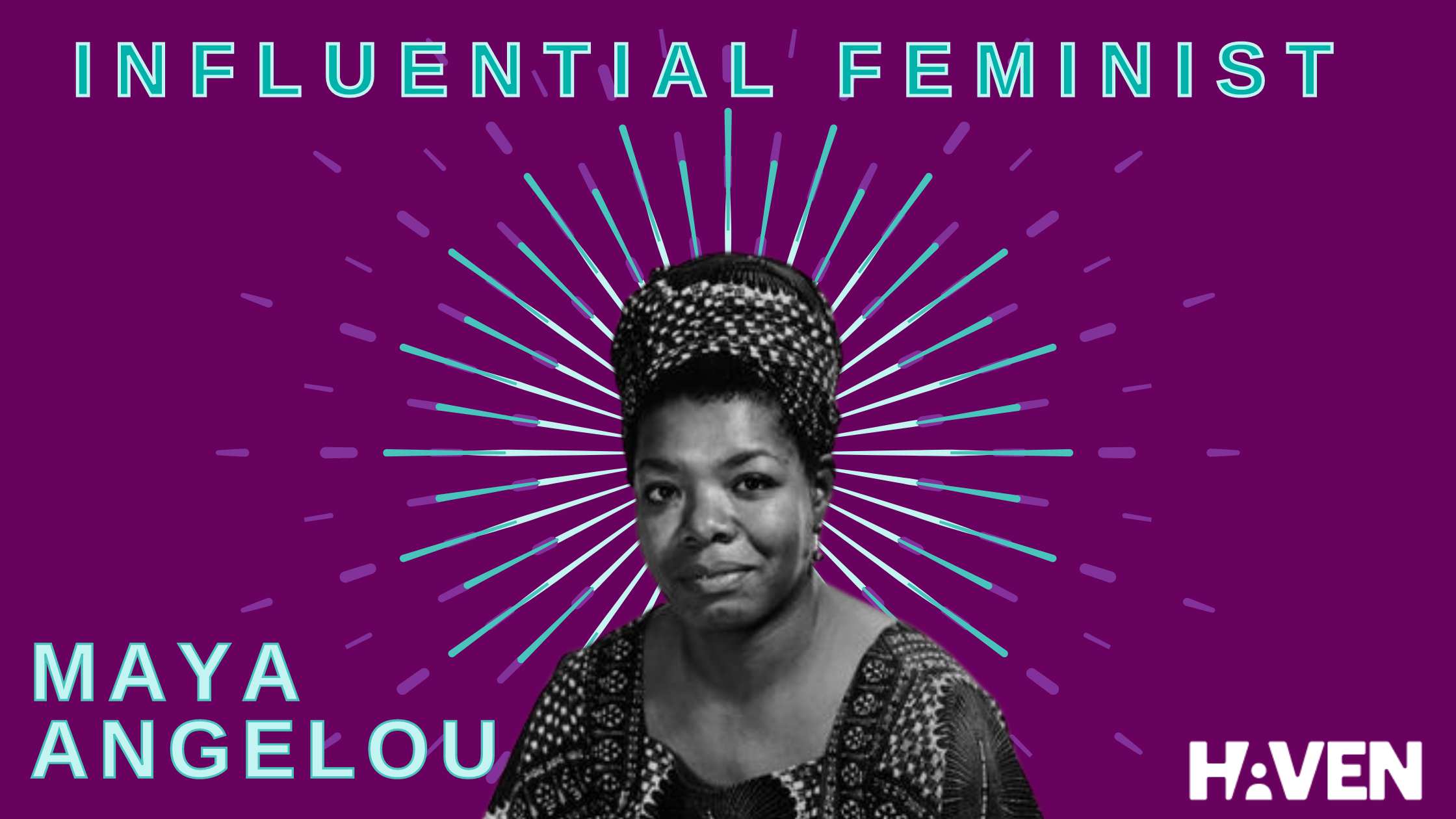 For Black History Month this February, and Women’s History Month in March, HAVEN honors Influential Feminists who have led the way and inspired others to speak their truths and to blaze their own courageous paths.

Maya Angelou (1928-2014), was an American poet, memoirist, actor, dancer, civil rights activist and trailblazer. Her several volumes of autobiography explore the themes of economic, racial, and sexual oppression. In addition to her autobiographies, she is known for her collections of essays, books of poetry, theatre and film scripts, and a number of children’s books. She was one of the first African American women to have a screenplay produced as a feature film and the first black woman director in Hollywood.  Nominated for a Pulitzer Prize, a Tony and 5 Grammy’s, she received dozens of awards and more than 50 honorary degrees.

At the age of seven, she was sexually assaulted and raped by her mother’s boyfriend. After disclosing the abuse to her family, he was arrested and found guilty, but only spent one day in jail. Upon his release, he was murdered. The traumatic sequence of events left Angelou mute for almost five years, believing, as she stated, “I thought, my voice killed him; I killed that man, because I told his name. And then I thought I would never speak again, because my voice would kill anyone.”

It was during this period of mutism when Angelou honed her love for books and literature, and her ability to listen and observe the world around her.

This early life is the focus of her first autobiographical work, I Know Why the Caged Bird Sings published in 1969, which gained critical acclaim and a National Book Award nomination.

Although Maya Angelou would later gain fame as an author and a poet, she began her career as a singer and dancer. In 1954, Marguerite “Rita” Johnson, who the world would come to know as Maya Angelou, broke into the San Francisco music scene as a calypso singer and dancer. It was then that she adopted the name Maya Angelou at the suggestion of her manager, who told her it was “distinctive”.

She studied modern dance in San Francisco with Anna Halprin—where she met another legend: Alvin Ailey. The two became dance partners and performed in a Calypso revue in Brooklyn, NY in 1957. Moving to New York, Angelou found encouragement for her literary talents at the Harlem Writers’ Guild.

She was active in the Civil Rights Movement and worked with Dr. Martin Luther King Jr. and Malcom X. Angelou joined Malcom X in building his Organization for African American Unity and remained friends and colleagues with him until his death in 1965.

After hearing Martin Luther King Jr speak at a church in Harlem in 1960, she decided to help raise money for the Southern Christian Leadership Conference (SCLC). She put on a revue called The Cabaret for Freedom and donated the proceeds to the SCLC. The event was so successful that she became the northern coordinator for the SCLC New York Office. She planned to tour the country with King during his Poor People’s Campaign, but due to his tragic death, the campaign was canceled.

She played many roles during the Civil Rights era and on multiple continents. She spent time living in Africa chronicling the struggles of anti-colonialism.  She lobbied at the US capital on behalf of marriage equality.  She knew W.E.B. Du Bois (co-creator of the NAACP) and Nelson Mandela. The personal connections she made and the movements she joined were shared in many of her memoirs.

Beginning in the 1990s, she made approximately 80 appearances a year on the lecture circuit, something she continued into her eighties. In 1993, Angelou shared her poem “On the Pulse of Morning” (1993) at the first inauguration of Bill Clinton. She continued writing and lecturing until her death in 2014.

The Blog is Back

What you need to know about: Sexting