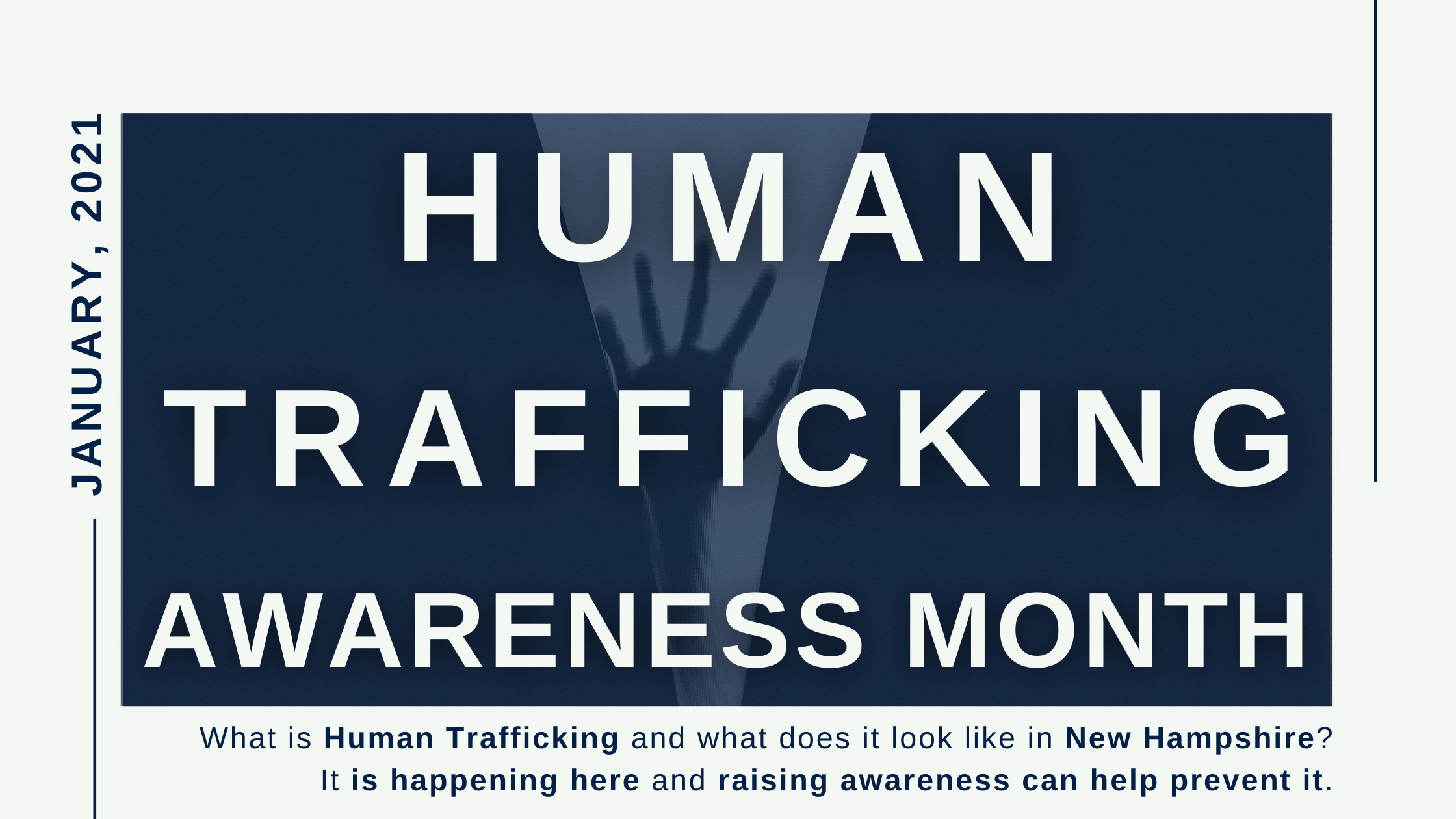 Human trafficking is the exploitation of a person through labor, services, or a commercial sex act by force, fraud, or coercion.

Human trafficking is very real issue in New Hampshire and around the world. However, disinformation and Hollywood movies make it difficult to identify and confront. Often times when people think of human trafficking, they think of the movie “Taken“, a film series where Liam Neeson rescues his daughter from a gang of armed kidnappers while she is vacationing in Europe. While those situations do exist, they account for a very small percentage of cases.

It is happening our own communities and almost always through pre-existing relationships. Sometimes, it’s labor exploitation, where traffickers target day laborers in fields like landscaping or construction, and force them into unpaid work. Other times, it’s sexual exploitation, where subjects are forced into non-consensual sex by someone who might have started as a significant other, family friend or drug supplier.

Sex trafficking victims frequently describe the beginning of a relationship with the person who would later exploit them as being comforting. The perpetrator would meet a need in their victim’s life; companionship, understanding, transportation, financial assistance or basic survival needs like food, shelter or substances. Then, when an imbalance in the relationship is achieved, the perpetrator flips the narrative on whose needs are being met. They demand to be compensated for their expenditures, in the form of exploitation.  It is at this point that an exploited person learns they are not the only one in this position and are part of a group that they may not leave and must work for or suffer extremely violent consequences.

In intimate partner violence we frequently use the analogy of a frog in boiling water. If you place a frog in a pot of boiling water it will immediately attempt to jump out and make its escape, but if you place a frog in a pot of tepid water and slowly turn up the heat it will keep adapting to its environment until it is too late. By then the water is too hot, the situation too dangerous. Once people experiencing intimate partner violence realize the present danger they are so alone in their experience they don’t know who to turn to or feel as if they don’t deserve help in getting out.

“Coercive control is not just a form of making victims dependent, but making them subordinate. … It’s a form of domination,” Stark said.

Coercive control is an inextricable component of human trafficking. Sex trafficking is managed through coercive control. It is the invisible shackle that people who traffic in other people use to hold them hostage.

Victims of human trafficking in most cases have what appears on the outside to be freedom of movement. In fact, they have been conditioned to do what their captor has demanded of them as a method of survival. They have either experienced consequences of non-compliance, witnessed repercussions of someone else’s non-compliance, or comply because someone that they care about is being threatened. Coercive control is powerful and pervasive. The presence of a weapon, even if it is not brandished signals an ability to escalate an encounter, to deadly consequences.

The raising of a hand in anger, as if to slap, but then not, signals the potential for violence. The tracking applications on cell phones and cars signal that a person is never free in their movements, always being watched, a form of stalking.

The John Jay College of Criminal Justice at the City University of New York studied coercive control in sex trafficking relationships and found that perpetrators use of coercive control was pervasive and extended to all aspects of the victim’s lives. The victims were subjected to long term micro-regulation and surveillance with intimidation and aggression which predictably led to exhaustion from the victims and compliance with the demands of their pimp. (https://academicworks.cuny.edu/jj_etds/103/).

Abusers are very adept at fooling everyone around them. They play the role of the romantic partner, the beleaguered spouse, the support person for a victim that they portray as “troubled”, “an unfit parent”, “making poor choices”, “out of control”.  In reality the victim is not “out of control”, the perpetrator has demanded control. Convincing their victims and the people around them that they are meeting the needs of everyone else is key to maintaining power and control over their victims.

The most effective way to combat human trafficking is to support the marginalized, vulnerable communities that traffickers prey on. Knowing the signs and indicators is also a way to raise awareness and put an end to human trafficking. You can learn them here at: https://www.nhhumantraffickingtaskforce.com/human-trafficking-indicators

There is help. HAVEN is a service agency member of the New Hampshire Human Trafficking Collaborative Task Force. We are available 24/7 for support services, safety planning and can assist with exit strategies. Being trafficked does not have to be a life sentence and you can get out.

The Blog is Back